Biodiesel in California: A Blueprint for Success?

The California Biodiesel Market: An Overview

In the 2015-’16 fiscal year, the CARB cap-and-trade program is set to generate approximately $2.5 billion in revenue for California’s GHG Reduction Fund (GGRF). Inaugurated in 2012, the program has helped establish California as an industry leader in a number of rapidly growing renewable energy markets, from solar photovoltaics to biofuels.

Cap-and-trade is just one of many GHG reduction programs established in the wake of California’s landmark AB 32 – the global warming solutions act of 2006. Notable among these is the Low Carbon Fuel Standard program (LCFS), which incentivizes the use of clean biodiesel for transportation means. Thanks largely to the LCFS and the work of biodiesel industry actors such as the NBB, the California bio diesel market has grown twenty-fold over the past 4 years, and is estimated at 200 million gallons as of 2016. The success demonstrated in California has led to the establishment of similar programs in other jurisdictions along the west coast, namely Oregon and British Columbia.

The Sustained Success of LCFS

Established in 2012, the California LCFS program has perhaps been the single largest driver of GHG emissions reductions in the California fuel sector. In order to achieve reductions at the lowest cost and in the most consumer-responsive manner, the LCFS utilizes a market-based credit trading system to allow providers to choose how they reduce emissions while responding to consumer demand. The program sets annual carbon-intensity targets for gasoline and diesel and creates rewards for fuels below each target and penalties for those exceeding it. The program applies to most fuels sold in the state although only oil-based fuels incur deficits, or compliance obligations. As of today, deficits incurred by selling gasoline and diesel can be covered with credits generated by ethanol, natural gas, biodiesel or electricity. Since 2015, California businesses in the transportation fuel sectors have become increasingly aware of the benefits offered by the program. Not surprisingly, this awareness has evolved in lockstep with the price of LCFS credits: 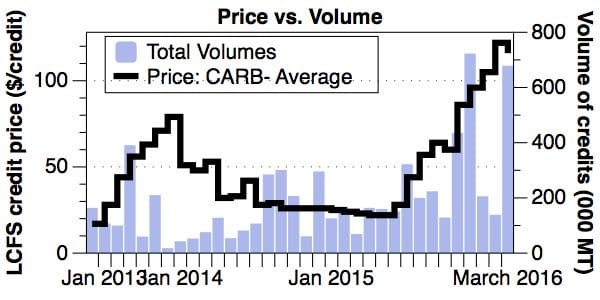 Today, having a robust strategy to deal with the impacts of the LCFS program has become an essential requirement for fuel distributors and retailers, transport companies and other industry actors who wish to remain competitive. The rate at which LCFS credit prices have grown has been a major boon for the biofuels industry.

The Business Benefits of Using Biofuels

California has a number of programs in place to promote the growth of electric vehicles in the state. Being said, technological and commercial advances in the EVx industry, great as they may be, simply cannot meet the short term needs of transportation companies in relation to the LCFS program. While battery-powered big rigs may not be too far into the future, businesses are seeking proven solutions that are already available on the market. For this reason, low-carbon biofuels like biodiesel have rapidly risen from obscurity to become a highly sought commodity in the state. The benefits of biodiesel in the Californian context are two-folds. On the one hand, bio diesel is exempt from the cap-and-trade carbon price, which makes it a viable option to meet carbon reduction targets. On the other hand, it can be swapped partially or entirely for diesel in existing vehicles, which eliminates the need for businesses to reinvest in their infrastructure to successfully exploit the benefits of LCFS.

The Impact of LCFS Beyond California

Seeking to emulate the success of LCFS in California, neighboring states Oregon, Alaska and Washington, as well as the Canadian province of British Columbia, are adopting similar low carbon transportation policies to spur GHG emission reductions on their respective territories. Over time, these LCFS programs will build an integrated West Coast market for low-carbon fuels that will create greater market pull, increased confidence for investors of low carbon alternative fuels, alongside synergistic implementation and enforcement programs.
The regional success of LCFS is great news for biodiesel suppliers, producers, blenders and retailers throughout the US and Canada. It also point us in the right direction in our fight against GHG emissions. On a national scale, biodiesel has the potential to reduce carbon emissions by 40 million tons annually, or the equivalent of removing more than 30 million passenger cars from the road.
Targray is a leading supplier of biodiesel in the United States and Canada. The company supplies B99/B100 biodiesel to truck stops, biodiesel traders and distributors across North America. It also provides customers with innovative business solutions aimed at maximizing profits and growth, and meeting specific blending and emissions requirements.
← The Impact of Solar PV Tariffs on the Photovoltaics Industry Energy Storage Systems: 10 Trends to Watch →