Addressing the Rising Demand for Biofuels in India

About The Domestic Indian Ethanol Market

In 2016, India had roughly 330 ethanol distilleries capable of producing over 4 billion liters of rectified spirit (alcohol) per year. Approximately half of these have the capacity to distill over 2 billion combined liters of conventional ethanol – primarily from sugar molasses, the main feedstock used for biofuels in India.
Indian ethanol production in the last decade has remained relatively stable, with the exception of a steep decline in 2009 and historic high registered last year. It is anticipated that production in 2017 will decline to 1.9 billion liters due to two consecutive years with less cane planting activities. Acute water scarcity and abnormal weather conditions in major cane planting regions are likely to discourage farmers from bringing new areas under cane production in the near future. 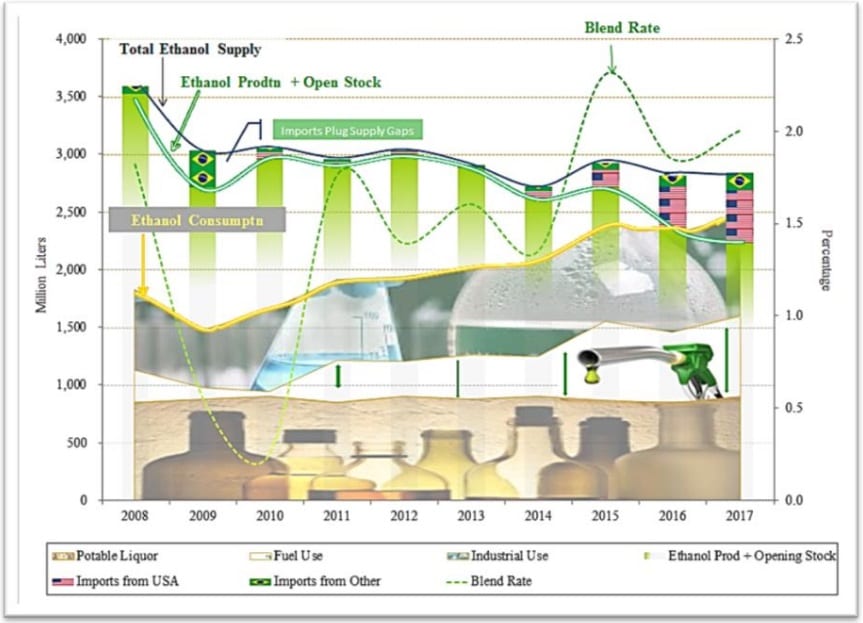 The Growing Demand for Biofuels in India

As can be seen in the above graphic, Indian ethanol consumption now outstrips production by a considerable margin, and the gap is set to grow even more in the years to come. Ethanol consumption grew from 1.8 billion liters to 2.4 billion liters in 2016, and will continue to increase in 2017 to 2.5 billion liters, over 70% of which will be destined for use in India’s industrial and chemical sectors. In 2015, fuel ethanol demand grew upwards of 650 million liters, putting into focus a need to address a deficit through imports. Given the government of India’s mandate, which stipulates the use of indigenous ethanol only for EBP, available ethanol supplies for blending will be relatively tight and the chemical and industrial sectors will have to rely more than ever before on imported ethanol.
As growing volumes of domestically produced ethanol are diverted into gasoline blending, there is a widening shortfall of ethanol used by Indian chemical manufacturers to produce downstream products such as ethyl acetate. Consequently, the USDA has projected that ethanol imports to India will reach up to 600,000 cu m next year. This would make the country into the second-largest ethanol importer in Asia.

US-based ethanol producers are facing a demand bottleneck due to the blend wall. As a result, they have turned to new markets such as India with pricing so attractive, even ethanol produced in neighboring Pakistan cannot compete. With a significant cost advantage over its rivals, US-produced ethanol is well positioned going forward to meet the requirements of price-sensitive buyers in India.