Recent corruption scandals have taken news headlines by storm in Latin America, fueling anti-establishment fervor throughout the region. As the dust settles on the political fracas, we take a closer look at four impact drivers which are helping create a bright outlook for the Latin American solar market.

Hydroelectricity accounts for approximately half of all power generation in Latin America today. Over the last few decades, changes to rainfall patterns and other natural weather phenomena brought about by climate change, like El Nino, have contributed to making hydroelectric power a less reliable energy source than it was in the past. In 2001, for instance, Brazil experienced a severe drought that led to a drop in water levels at several hydroelectric dams, leaving millions of people and businesses without electricity for months.

In recent years, the appetite for dam construction in the region has been limited due to the high social and environmental costs involved (deforestation, population displacement). Consequently, Latin American countries seeking to solidify their energy infrastructure and avoid another energy crisis are now turning their focus to Solar PV systems.

Latin America has traditionally lagged behind Europe, Asia and North America with regards to solar-friendly policy implementation. But recent developments in the region suggest there may be brighter days ahead for the Latin American solar sector:

Colombia‘s energy and gas regulator CREG published new regulations that will allow the sale of surplus energy to the national grid. In addition, Plan5Caribe has kick-started the investment scheme for transmission, distribution and substation construction, so that more solar projects can connect to the grid.

The Ministry of Energy and Mines (MEM) of Nicaragua announced the publication of the new regulation for self-consumption and net metering. In December 2017, the local Parliament also approved a reform of the Law 532, which extends the fiscal incentives for renewable energy for another five years. National Electricity Transmission Company (ENATREL) announced its plans for installing 11,000 solar PV systems by the end of 2018.

Brazil plans to introduce its first Certified Green Bond for solar energy. The bond will be issued by Faro Energy and will be used to finance distributed solar power projects across the country. In other news, the National Congress of Brazil is reviewing a plan for the country to join the International Solar Alliance (ISA), which would give additional benefits in the areas of financing, incentives policies and R&D to Brazil-based solar projects.

In the three Latin American markets with the greatest potential for solar installations – Mexico, Brazil and Chile – financial stability is slowly returning after a period of recession. Although election promises around investment in energy – such as those recently made by Mexican President-Elect Andres Manuel Lopez Obrador (AMLO) – have been vague, the consolidation of power in Mexico’s congress combined with AMLO’s poise are expected to help stabilize the economy and restore investor confidence.

In Brazil, six banks now account for 86% of loans, and interest rates can run into three figures. On the other hand, private banks such as Itaú Unibanco, Bradesco and Santander have chalked up returns on equity of 18% in the second quarter. Greater involvement of these firms in Brazil’s solar sector – which struggles with financing – is likely to become an important contributor to its growth moving forward. 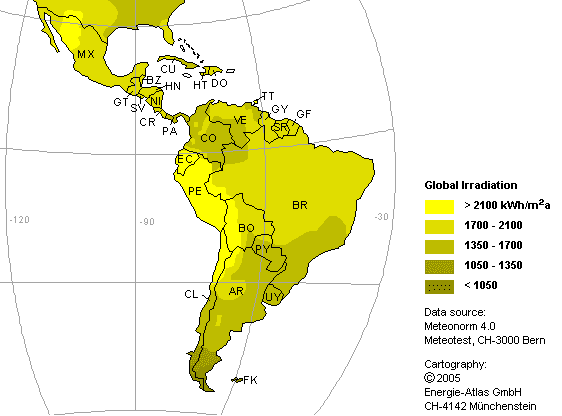 Select regions within the Solar Belt (Baja California, Mexico; Sertão, Brazil) experience high irradiation ranging from 1,600- 2,250 kWh/ m2 per year, and Chile’s Atacama Desert features the highest solar irradiation in the world. As of today, the vast solar potential of these regions  – which if developed could serve all of South America’s energy needs – remains largely untapped.